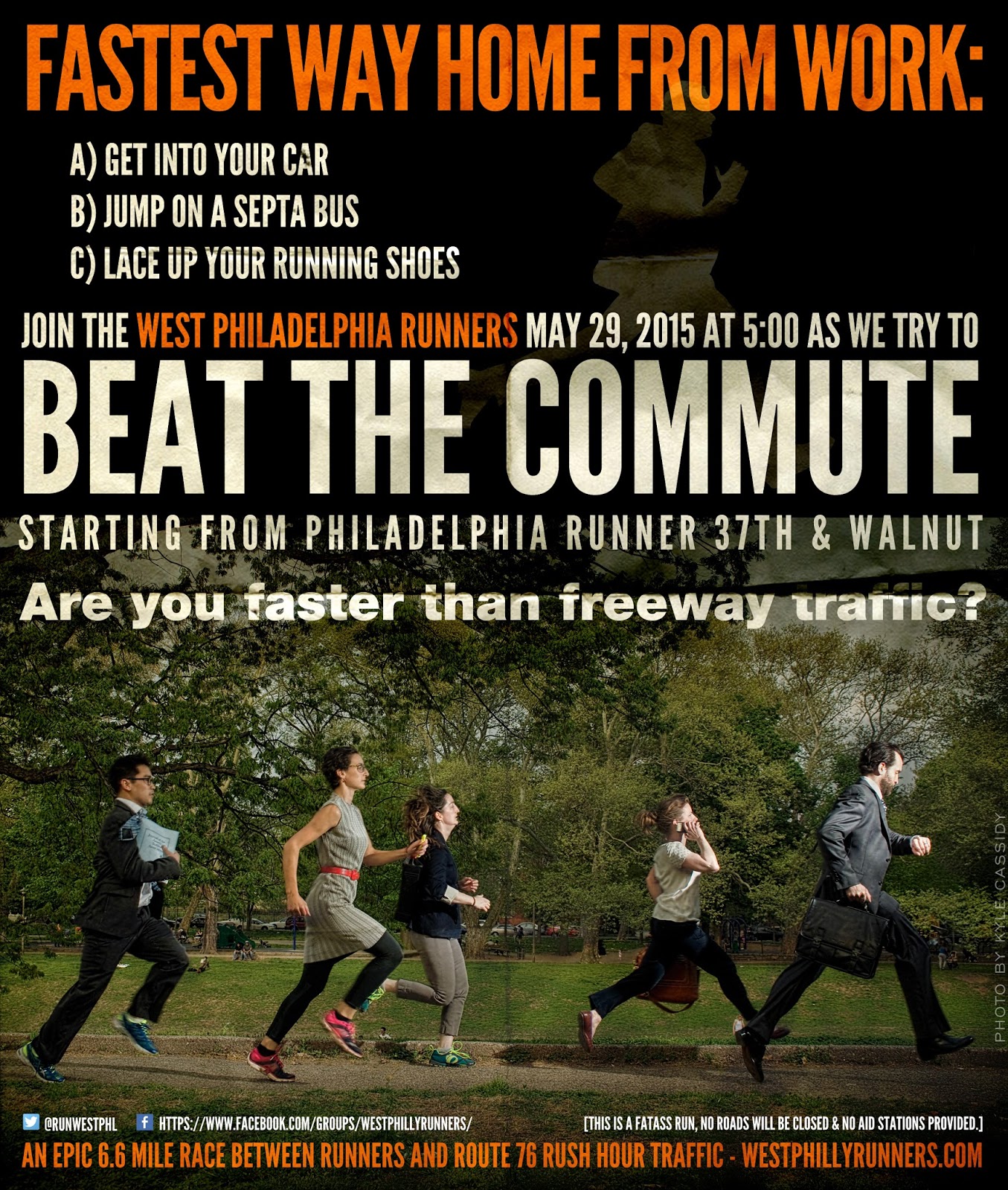 May 29 5pm starting at Philadelphia Runners West Philly (3621 Walnut St)
Ever been stuck in traffic on your drive home and wonder whether you could just run home faster. Well, now's your chance to prove it.
Join West Philly Runners, Philadelphia Runner, and SEPTA as we run against a commuter driving the traffic-clogged I-76 and a public-transit rider. The run will be approximately a 10K (6.6 miles).
The runners, driver, and public-transit rider will all begin their commutes at the same place and time. The driver will make her/his way to their parked car, the public transit rider will head to the bus station, and the runners will start their run out to and along the Schuylkill River trail.
The race will begin at the Philadelphia Runner store in West Philly (37th and Walnut) and end at the Wissahickon Transportation Center (where the Schuylkill trail meets Ridge Ave).
The finish line is the Wissahickon Transportation Center, so all participants (drivers, riders, and runners) must reach that location.
West River 5.7 Miles: http://www.mapmyrun.com/routes/view/702871079
East River 6.6 Miles: http://www.mapmyrun.com/routes/view/681932270

Every Wednesday evening at 6:30 pm, we meet at Clark Park (at least during COVID times) for a group run. We run a new set of 2, 4 and 6 mile routes each week. All three distances start together and end at the same place.

We do an interval training workout on Mondays at 5:30pm at Penn Park. The typical workout is repeat 1000s.
And we meet up at the end of our runs on Fridays at 7am at the Woodlands Gate to mix it up for a morning run once a week.

Come out for a run with us, no matter your experience level. We welcome all runners; our runners typically run 10 minutes/mile or faster.
Each run will finish up back at one of several local West Philly bars or at at runner's place for some post-run beers. Most weeks we end at the Local 44 Bottle Shop or Pasqually's Pizza. Bring your ID and a few dollars.
We are inspired in large part by our friends the Fishtown Beer Runners and the South Philly Striders. If you are looking for other running groups check out the Master List of Philly Running Clubs.
Subscribe below to automatically get an email about each week's run and upcoming events as soon as I make a new posting.